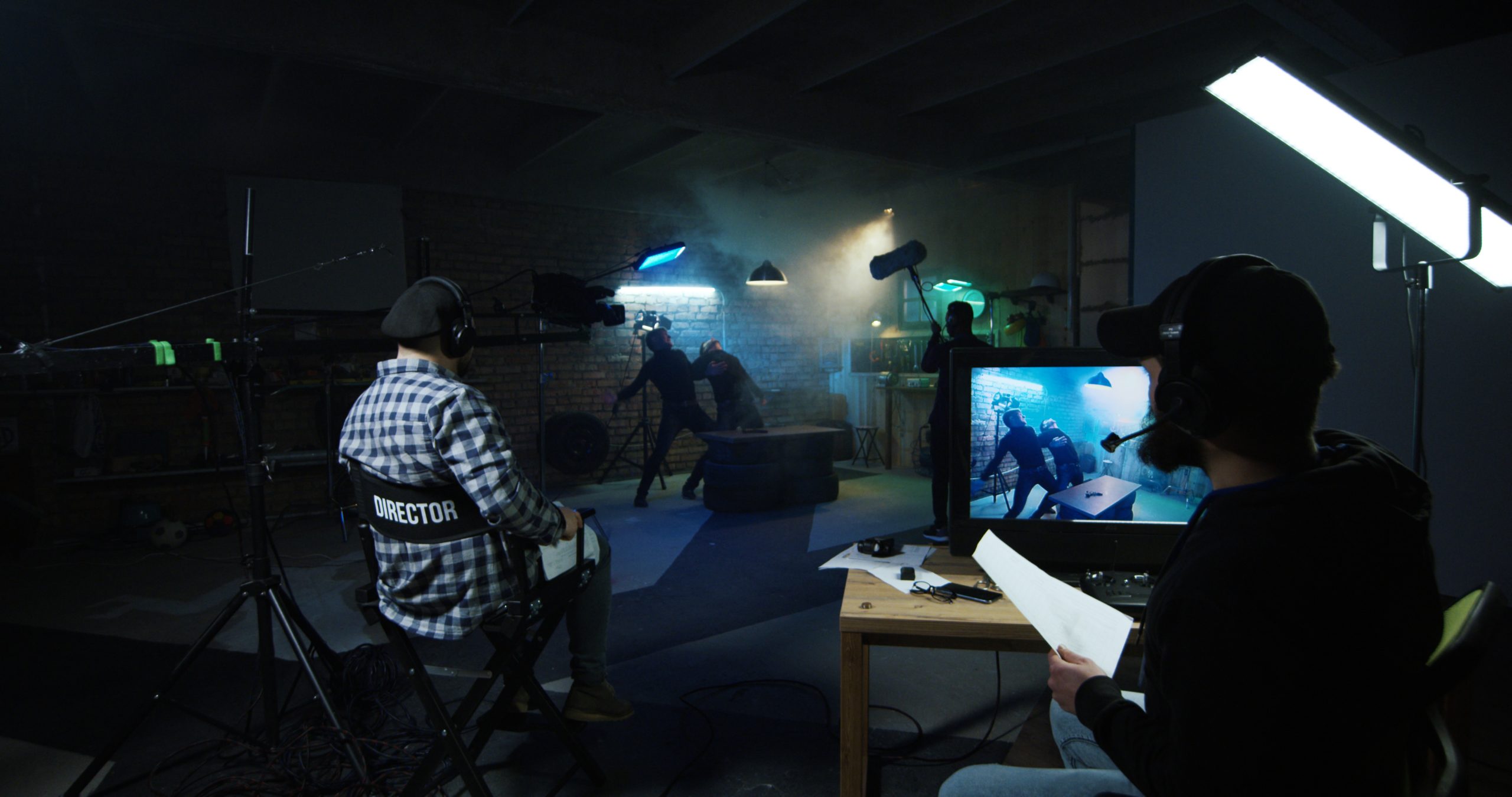 Why wait for the phone to ring for acting work? Take control of your acting career by making your own films. Learn screen acting skills and fimmaking techniques at the same time with our unique pathway in Acting and Filmmaking!

The Raindance Level 5 HND allows you to progress onto our BA Hon’s top-up Degree in Film and Performing Arts Practices, validated by DeMontfort University.

What you will learn

This is a full-time University level course for those who wish to pursue a career in acting for screen and/or filmmaking with focus on performance and character development. Students will build a foundation in all pathways related to creating visual content.

The Raindance HND in Acting and Filmmaking will explore certain key theories to underpin and aid performance technique, but the emphasis will always be on putting the theory into practice, through practical exercises. These will include performances of scenes and filmed extracts, leading to the production of short films and showcases.

Students will build a foundation in all key concepts of acting such as Improvisation, Meisner’s, and Stanislavski’s systems, and will learn key skills in filmmaking such as screenwriting, directing and producing. More details on the techniques taught can be found in the FAQs below.

Raindance Film School partners with Mandy.com, the largest online actor’s database in the United Kingdom, to help with hosting showcase events and casting seminars throughout the course!

In addition to the option of progressing onto a one-year BA Hon’s top-up, you will also benefit from numerous opportunities to audition for, and perform in, Raindance HND and MA Films. This will give you even more time to become become familiar with the realities of acting ‘on set’.

Looking for to get deep into the technical side of filmmaking?

Learn about our HND in Filmmaking

The Higher National Diploma (HND) is an internationally recognised UK qualification that provides specialist vocational learning at levels 4 and 5. HNDs are delivered by universities and colleges, and are considered the equivalent of the first two years of a three-year university degree course. Students can often progress onto the final year of the Top UP degree programme to obtain a full B.A. (Hons).

This technique concentrates on two key ideas: Acting: Before You Think and

Thinking: Before You Act. Whilst studying Script Analysis and Performance Technique, students explore scripts by understanding the story and the written circumstances, and then going through the process of choosing ‘actions’ and making choices that will create a character.

The technique focuses on what is actually happening in the scene and on the pursuit of an action or goal. Developed by David Mamet and William H. Macy, the methodology explores two main elements: what the character is “doing,” and what he/she “wants”. This is distilled down to a playable “action,” which the actor personalizes through what is called an “as if.” The second part of the technique is called Moment: students will complete a variety of exercises, including Repetition, which will help them conquer self-consciousness and teach them how to focus on the other people in a scene, and to act spontaneously and truthfully to that stimuli.

Improvisation classes will introduce students to the five basic concepts of improvisation: Specificity, “Yes and…”, Object Work, Emotion and Status.

Improvising, and being comfortable improvising, is fundamental to an actor’s preparation. These classes will introduce students to the power of this skill and allow them to learn how to use it in a way that will help their confidence and their overall acting craft.

Meisner Technique takes as it’s basis, what is sometimes called “truthful acting.” Peter Brook refers to this as the “invisible actor”. i.e. acting the truth of a character, not seeking to make them “interesting” or “entertaining”. Sanford Meisner, who developed the method, encouraged his students to live truthfully under any given imaginary circumstance. The approach to the method is to have the actor act on fundamental emotional impulses – their instinct as opposed to their brain.

Stanislavski was the originator and the father of most modern acting theory. His theories were the starting point for most methodologies that came after, including Meisner and Strassberg. His philosophy, in essence, encourages an actor to use his/her emotional memory when approaching work, asking themselves, “How would I react if this was really happening to me?”

Acting for the Camera

Most traditional training methods for the actor make no allowance for the specificity of screen acting, rather they adopt a ‘one size fits all’ approach, that focuses the student solely on ‘truthfulness’. These classes will look at the specific challenges of acting on screen, as compared to stage. This includes learning how to maintain concentration on a set and not being distracted by a camera and crew, learning how to deliver a performance suitable for the size of shot and the scene, learning how and when to be consistent for continuity, and understanding the importance of character arcs so as not to be confused by shooting out of sequence.

These classes will look at the techniques used by performers such as Sacha Baron Cohen, Leigh Francis and Helena Bonham Carter and is particularly suited to devised work and work that contains ‘movement’ elements. The approach is designed to allow the student to discover the pleasure of performing. There are philosophical principles involved, but it is more about finding the ‘fun’ in acting and performing, or as Philippe Gaulier terms it: “Le Jeu – ‘the game’”.

“Speaking is part of a whole: an expression of inner life.” Cicely Berry’s work is based on the conviction that our natural instincts have been crippled from birth by conditioning. She argues, an actor needs precise exercise, and clear understanding, to liberate hidden possibilities and to learn the hard task of being true to the ′instinct of the moment′. Her methodology begins from a simple premise: there is no such thing as a correct voice. “There is no right way––there are only a million wrong ways, which are wrong because they deny what would otherwise be affirmed. Wrong uses of the voice are those that constipate feeling, constrict activity, blunt expression, level out idiosyncrasy, generalize experience, coarsen intimacy.”

Auditions are the life blood for any actor, and knowing how to approach them in a way that best delivers what the Director looking for is key. The classes aim to allow the student to understand how to prepare for auditions, how to be comfortable and confident when sight reading, and how to ‘work’ the room.

What days do I need to go in?

Although the HND programme is full-time, we have structured it to allow you to work around your work/life commitments. The course runs two days per week, from 10:30 to 17:30.

Do you offer accomodation?

Student housing in central London is very expensive, which is another reason why our model is perfect for students who cannot commute from home. Hotels can be booked for as little as £75 per night in the area if booked in advance. As you only need one night, you can travel from Paris and back with a night’s stay for less than a week’s rent.

What are the entry requirements?

Students under 21 years should ideally have GCSE English at grade A*-C (grade 9 – 4) and a full Level 3 qualification such as BTEC, A Level or an Access to HE Course. If you have industry experience, we can consider your application on a case-by-case basis.

Students over 21 can apply as mature students providing they can demonstrate the ability (and experience) to study at the appropriate level. Employment history will be advantageous and qualifications taken several years ago will also be taken into account.

All students study common modules in their first year. This builds the foundation of the study programme:

In the second year, students start to specialise in specific areas of filmmaking, developing their skills further and working in teams on industry-style projects.

* Units can be subject to change.

How is the course assessed?

Assessment is through a series of assignments including research modules, hands-on practical exercises and group projects.

Units are interlinked to replicate “real world” scenarios and offer the opportunity for students to build a range of skills to maximise employment opportunities.

Where next - what can I study after I complete my HND?

Upon successful completion and approval, students can progress onto the Raindance Bachelor of Art’s one-year programme in Film, allowing them to obtain a Bachelor’s Degree within 3 years of starting this course.

Where next - what are my job opportunities after Raindance?

Students can enter employment in a wide range of roles within the film industry. Careers include screenwriting, directing, producing, documentary filmmaking or cinematography.

We aim to restrict class sizes to 15 per group. This allows us to run practical workshops and give all our students on-going hands-on support throughout their learning.

Do I need anything else before I start?

You will just need a laptop computer that meets the requirements to run the Adobe Creative Suite. If you don’t have a laptop computer, Raindance can supply you one at a discounted price. Come and talk to us before making your purchase.

How do I apply?

When we have received your application we will contact you to arrange an interview time.

BENEFITS OF A RAINDANCE HND